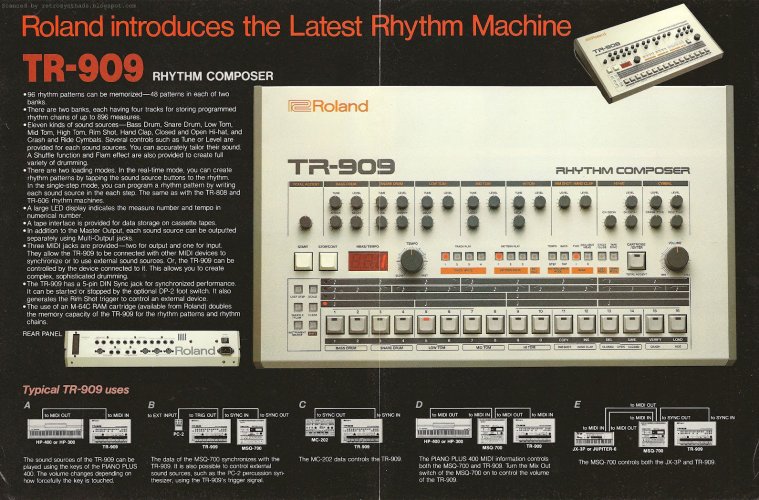 Roland’s TR-909 drum machine has always lived in the shadow of its more widely-loved sibling, the TR-808.

But for some producers, the 909 is the only drum machine you’ll ever need. Just ask Detroit techno legend Jeff Mills, who loves it so much he turned his oldest 909 into a one-of-a-kind UFO-inspired instrument. A key tool for early techno and house artists, the 909 has been just as important to the development of club culture as the 808.

Released in 1984, the 909 was canned by Roland just a year later as the company decided it needed to release a purely sample-based drum machine to beat the competition. It wasn’t until later in the ‘80s that it began to get picked up by producers in Chicago and Detroit such as Derrick May, Frankie Knuckles and Mills on the second-hand market.

While the boomy, soft 808 kick drum is often used in lieu of a bassline, the 909’s more brutal sound is like a punch in the gut, and if you’ve danced in a club at any point in the past 30 years, you’ll probably have felt its frequencies shaking your cranium. There’s nothing quite like it.

As August 8 has become known internationally as 808 Day, September 9 is celebrated by its loyal fans as 909 Day. To mark the occasion, we put together an Apple Music playlist that shows the drum machine’s different sides: classic house (‘Can You Feel It’), vintage techno (‘Energy Flash’), hip-hop (‘P.S.K. ‘What Does It Mean?”) and even contemporary grime (‘Take Time’).

Listen here, and if you want to get to grips with a 909 at home, play one in your browser.